Hordes of walkers move towards the same target. They are looking for something, and willing to fight to catch it. This is not the plot of a post-apocalyptic drama. This is what is happening right now with Pokemon Go.

In less than two weeks, the brand-new mobile game of the Nintendo franchise has gone from an experiment to a social phenomenon, to a business case. A story that every retail brand should listen carefully.

Pokemon Go, developed by Niantic, is the demonstration that, in the social age, mobile games are a winning marketing tool. The whole thing is quite ironic if you think about it. Nintendo, in fact, has long awaited before entering the mobile app arena, because it was scared that the smartphone would affect its core business, the home gaming consoles.

This is the same distrust that we can somehow perceive in those companies that rely on the physical store for large part of their revenues. It is the fear of an innovation that might transform into a revolution. And yet, love it or hate it, you have most certainly heard of the Pokemon game by now.

Thanks to the incredible - and unexpected - spread of the mobile app, the parent company Nintendo has already cashed in more than 7.5 billion dollars by now. Smart retailers are wisely following the trend, and they are trying to understand how to capitalize the fact that people are forced to move around the city to compete in the game.

If we had to find the one single reason why Pokemon Go is having such a remarkable success, it would be exactly the ability to fuse the digital and physical worlds. Despite not being a true augmented reality application, the game is using this technology to integrate the fantastic elements into the real-life outline.

Users play as Pokemon trainers, and they have to stroll around to search for new monsters to catch and add to their collection. They can then train them in proper gyms, or upgrade their abilities visiting the PokeStops, geographically designated points within Google Maps.

One of the most popular items for purchase are the so-called ‘lures’: When activated, lures attract Pokemon creatures to an area. They cost roughly 1.20 dollars/hour and only work when activated as a module in a PokeStop. Here is how the developers at Niantic monetize their app.

More often than not, while users walk around, they might find themselves entering a retail store. The creatures can be literally everywhere, as they are automatically localized within a map. The dislocation might look random at first sight, but it is more studied than it looks.

The frenzied race in search of the next item has already created surreal situations: 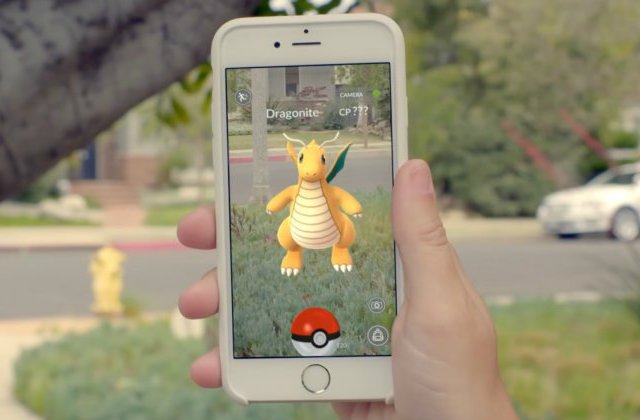 Pokemon Go is not the first mobile application that drives people to move. Without considering the bunch of health and fitness apps (plus the EU’s Pegaso Fit4Future project), we need to cite at least Foursquare, and the race to become the mayor of whatever place.

Foursquare is a good example of how retailers can take advantage of the game dynamics to attract new customers and build loyalty. According to Cowen & Co. analyst Oliver Chen, "it has the power to transform retail. In our view, the new free-to-play [augmented reality] gaming app has broad implications for retail as it addresses declining mall traffic, plus emerging trends toward social experience, health, and wellness."

Paul Shapiro, director of search innovation at Catalyst, says that the game is exposing a pretty large set of consumers to augmented reality: "It is incredible how it is everywhere. It is all ages, genders. It is obviously massive." Catch after catch, the game is redefining how people connect to the store. The retail customer experience.

If you own a brick and mortar, it is utterly useless to reject people or try to create a ‘Pokemon-free’ area. You should capitalize this opportunity, instead. How? To get back to lures, if your business happens to be situated relatively close to a PokeStop, you can attract people to your location for little more than a dollar per hour.

It is what many local businesses are doing in the United States, with analysts reporting as much as a 75 percent increase in profitability due to the lure usage. And this is not even the result of a planned strategy. It is more a ‘give it a try’ attitude that Niantic is already thinking to exploit.

In a recent interview with Financial Times, John Hanke, CEO of Niantic hinted at plans to develop partnerships with retailers within the game: "There is a second component to our business model at Niantic, which is this concept of sponsored locations.” Why not, given that both gyms and PokeStops are real-world locations that attract the players?

Players will be encouraged to visit specific a location (your store) to collect items and gain experience. This might change the way businesses interact online and also in the real world, with evident consequences on the digital customer experience.

Retailers should take note of what is going on in the streets these days. Here are three major takeaways from the Pokemon craze:

Pokemon Go is making history, and you can be part of it. Only time will tell if the app is destined to become a temporary fad or an enduring success. What really matters, in a business perspective, is that games are never just games, after all.